I do not think that there can ever be enough books about anything and I say that knowing that some of them are going to be about Pilates.The more knowledge the better seems like a solid rule of thumb, even though I have watched enough science fiction films to accept that humanity’s unchecked pursuit of learning will end with robots taking over the world.-Sarah Vowell

Behind Every Great Man: The Forgotten Women Behind the World's Famous and Infamous by Marlene Wagman-Geller 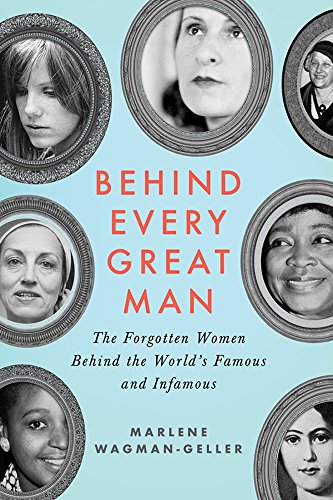 There are many things you can say about these women, some are proud, others doormats, some crazy, there are homemakers, helpmeets, rabble rousers, dedicated to a cause, or just plain delusional.  But you can never say that they are not smart or that they did not help historic men get to where they did.  They are history's footnotes and the ones who are overshadowed by the lives of great men, either because at the time, women were viewed as being less, or because the man's personality simply was too powerful.  Some of these women you will want to reach back through the sands of time and shake, give a few slaps to the face and say "Snap out of it! He does not deserve you!".  Others you will applaud their ability to make the difficult decision to walk away.  Either way, these are incredible women you will not soon forget.

The first chapter details the life of Mrs. Karl Marx.  It's rather sad that my response to this was, "Karl Marx was married?"  It never occurred to me that he would ever consider marriage, for some reason.  Johanna Bertha Julie Jenny von Westphalen, the daughter of a Baron in Prussia, fell head over heels in love with the poor Marx and refused to marry anyone else, much to the consternation of her family.  She would wait seven years for him to return from Berlin with a degree.  By this time, her father would be dead and her mother, fearing she would die an old maid, gave in and let her marry him.  Marx would get a job at a newspaper writing leftist articles, but it wasn't his articles that got him fired, but his inability to meet a deadline.  When he began to insult the King of Prussia in print, the two, with children in tow, began to flee through Europe for their lives.  They settled in squalor in London, where they do not speak the language while Marx writes his famous Manifesto.  Jenny, pregnant with their fourth child would go on a speaking tour to promote his views, while Marx stayed at home and got the housekeeper pregnant.  The whole thing was hushed up, but Jenny found out anyway and blew a gasket.  Life would go on a while longer for them but would end tragically for the whole family.

Mrs.. Wagner, or the delusional one, as I call her (of course you have to be to like his music), Cosima, is the daughter of a liaison between the famous pianist Liszt and his married mistress.  When the affair ended bitterly, he refused to let her see their children and they ended up in the care of a Nurse Ratchet ancestor, whose only good thing she did for the children was to die.  Cosima adored her absentee father and was obsessed with music and musicians.  She would marry his father's pupil, Hans von Bulow in the hopes that he would become a great musician, but was deeply disappointed.  When she met the racist anti-Semite Wagner, whose music she loved, she declared her undying love. A few days later, he would go out and marry another woman.  This, however, would not keep Cosima from her great love.  Eventually, the two would marry and she declared that she wanted to die at the same time he did as she could not live without him. Now, if I had a time machine, I would travel back in time and grant her this wish and take a shotgun and shoot her head off so she would not continue to live for many decades until 1930 when the Nazi would take Wagner's music and turn it into a kind of national anthem for Germany, ensuring that Wagner will never die.  The two insane people were perfect for each other, though Wagner's fidelity was not always as certain.

Mileva Maric, a Slav, had two disabilities during the nineteenth century: a severely displaced hip, leaving one leg three inches shorter than the other, and a genius intellect.  Her wise parents, realizing, perhaps that she would not have a chance a marriage, encouraged her schooling and she became one of the first women to get into Switzerland's Zurich Polytechnic, the MIT of Europe, where she quickly rose to the top of her class.  It was here that she would have a fateful meeting with Albert Einstein, whom she would become best friends with, as he was already interested in another girl.  The more time they spent together, however, the closer the two became.  Einstein's mother warned him to end the relationship with the shiksa before something happened, but Mileva was the first person he could really talk to about anything with and who really understood him.  He would indeed get her pregnant, but he would not ask her to marry him.  She would have to return home because she was being kicked out of school.  There is no record of what happened to the baby girl they had.  He would marry her later, partly out of guilt and partly because he still loved her.  They would spend hours in the lab working.  This was 1905, known as Einstein's Annus Mirabilis (Year of Miracles) where many of his incredible ideas would come from.  How much input Mileva had, is unknown to history.  Eventually, as they began to have children, her role began to be relegated to motherhood and her role in history erased, as Einstein's eye began to wonder.

Not all of the men are bad.  Julius Rosenberg was a jewel of a man who found himself accused of something he did not do by his brother-in-law who was trying to escape a death sentence.  Ethel would also be named so that her brother's wife could be spared.  The two met when they were young and she was terrified to go on stage to sing and he walked up and told her to pretend she was singing only to him.  They fell immediately in love.  They both believed in workers rights and unions, which meant that they had both belonged to the Communist Party, as had many before World War II.  Ethel could have saved herself at any time and raised her children by denouncing her husband and naming names, but she refused.  She, more than most women, gives the true meaning to standing by your man. Before they died, they shared side by side cells and she sang to him like she had so long ago.

Ian Fleming, sworn bachelor, and author of the James Bond spy series would be brought down by a woman that would be the first Bond girl, Ann Geraldine Mary Charteris, whose shared a love of S and M and whose pregnancy, would eventually get him to the altar.  But things would only last so long and soon another woman, the inspiration for Pussy Galore, would turn Fleming's head. This would begin the heartache for poor Ann, without whom, the world would not have 007.

Ruth Bell's father was a Presbyterian doctor in Pearl S. Buck's father's ministry in China and Ruth was looked after by a born again procuress of "little flowers".  Her dream was to be an unmarried missionary.  Before she did this, her father insisted she go to Wheaton College, near Chicago, which is where she met Billy Graham and the two immediately fell in love.  Ruth knew that Billy's Southern Baptist's beliefs would mean that she would be stuck at home raising the children and would have to give up her dream of being a missionary, but she was in love.  What Billy did not know, was that Ruth was always looking for loopholes through the idea of submitting to your husband, which was not a Presbyterian idea.  It was not easy raising a brood of children mostly alone, sharing your husband with the world, but she was the best thing that ever happened to him.  She kept his ego firmly in check and on the right path.  Her most searing quip was when she was asked if she had ever considered divorce she had said "No. Murder. Yes."

Rachel Annetta Isum would be the first of her family to go to college, UCLA, where she would meet the famous Jackie Robinson.  He would go to Hawaii to seek a semi-pro career and they would agree to marry, until, two days after he left, Pearl Harbor happened and he joined up but told her she shouldn't volunteer herself (she had been studying to be a nurse).  After a brief break-up, they got back together and after the war, when the president of the Dodgers, Branch Rickey discovers him, they get married and embark on a difficult life together.  Robinson would have this to say about it: Thinking about Rae always makes me want to remind women how important they are in making the world go around.  It's an old saying--but a true one-that behind every successful man there is usually a woman who deserves much credit for his success.  Rachel and the children would be there for every game, putting up with all the racial abuse over the years and watch him leave their lives much too soon.  Rachel is still alive and kicking doing her part to make the world a better and fairer place for others.

There are so many women to mention.  Like the women who endured much for their freedom fighting husbands, Gandhi, Malcolm X, and Mandela.   The poor woman who would suffer after her husband Oscar Wilde met the wrong man.  The one woman who walked away from Picasso and ended up marrying another famous and influential man.  The fiery woman, his Heart, who helped Larry Flynt begin Hustler magazine and match him cuss word and woman to woman and bring him back from the dead by his cojones.  The wronged Mrs. Stieg Larsson and the amazing relationship with the woman who supposedly broke up the Police and stole Sting away from her best friend.  And the completely bizarre relationship between the very weird Robin Gibbs and his wife, a Celtic Priestess, among other things.  And is anyone capable of loving a monster as Eva Braun did with Hitler? These women are all amazing in their own way.  Some are able to walk away from the disaster of their men, while others went down in a blaze of glory or faded into the night.  They have all mostly been forgotten to all of us, which is why this book is so important.  I salute these women who were brave enough to try.

--Marlene Wagman-Geller (Behind Every Great Man: The Forgotten Women Behind the World’s Famous and Infamous p 16)

Still I Rise: The Persistance of Phenomenal Women by Marlene Wagman-Geller

This book contains the incredible stories of women who have lived amazing lives that changed the lives of others.  For example, Irene Sen...

Oh, the places I go where you can find out more